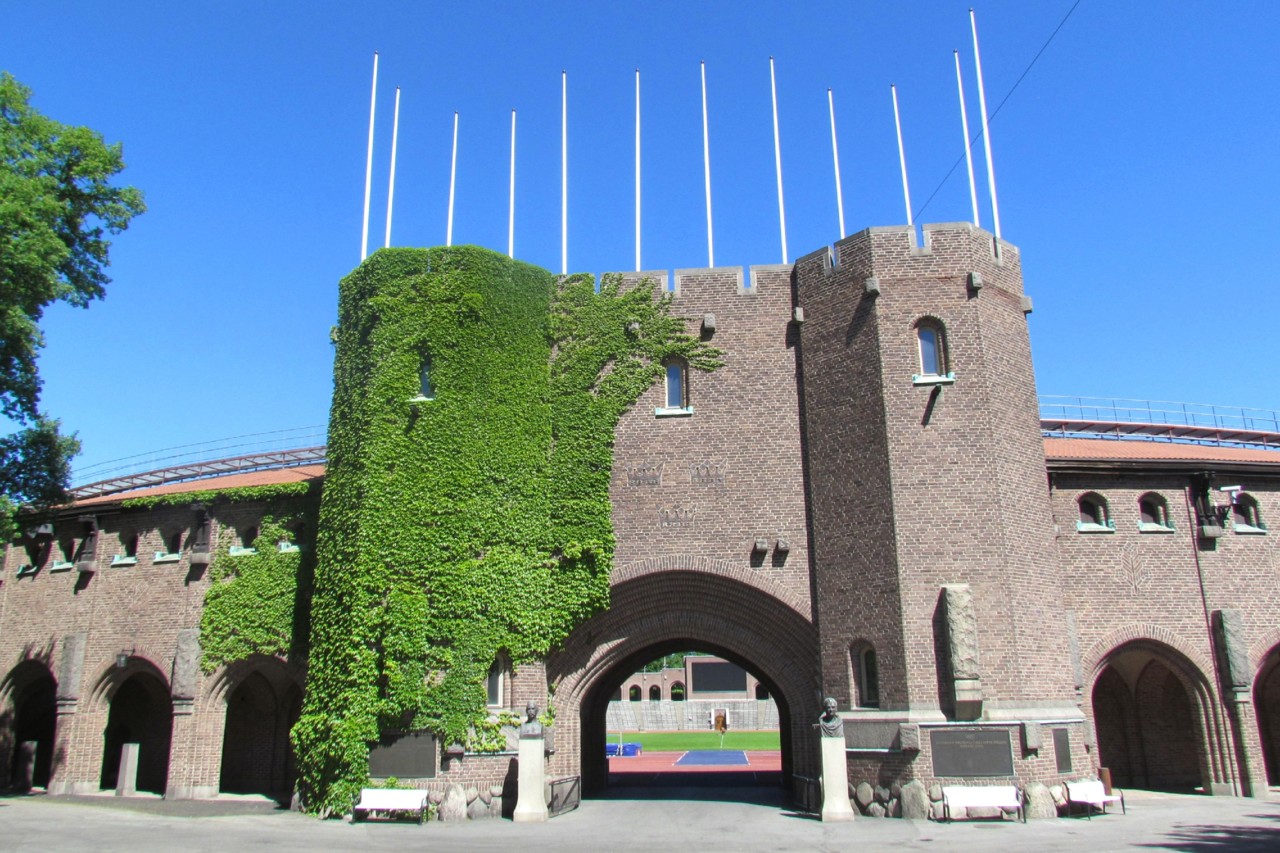 The path to the Olympic Stadium in Stockholm began the day before... in Helsinki. TAP had messed up our flight times and anticipated our return flight from Sweden for a time we wouldn't even be at the airport after returning from Finland by cruise.

After an exchange of messages on Twitter, the solution was a stopover in Frankfurt that, among other things, would allow us to spend a few more hours in Stockholm the next day. Visiting the stadium that hosted the 1912 Games was not among our priorities, but the extra time made it possible. Fortunately.

We never thought of it as a true goal but we began to realize that throughout our travels there has been room for visits to Olympic venues. The Berlin one was one of the most interesting points of the trip, but we also passed through Los Angeles, Beijing and Barcelona. This time, we thought we would be able to see one in Helsinki, but everything was under construction and we couldn't see more than the statues of Paavo Nurmi and Lasse Viren outside. 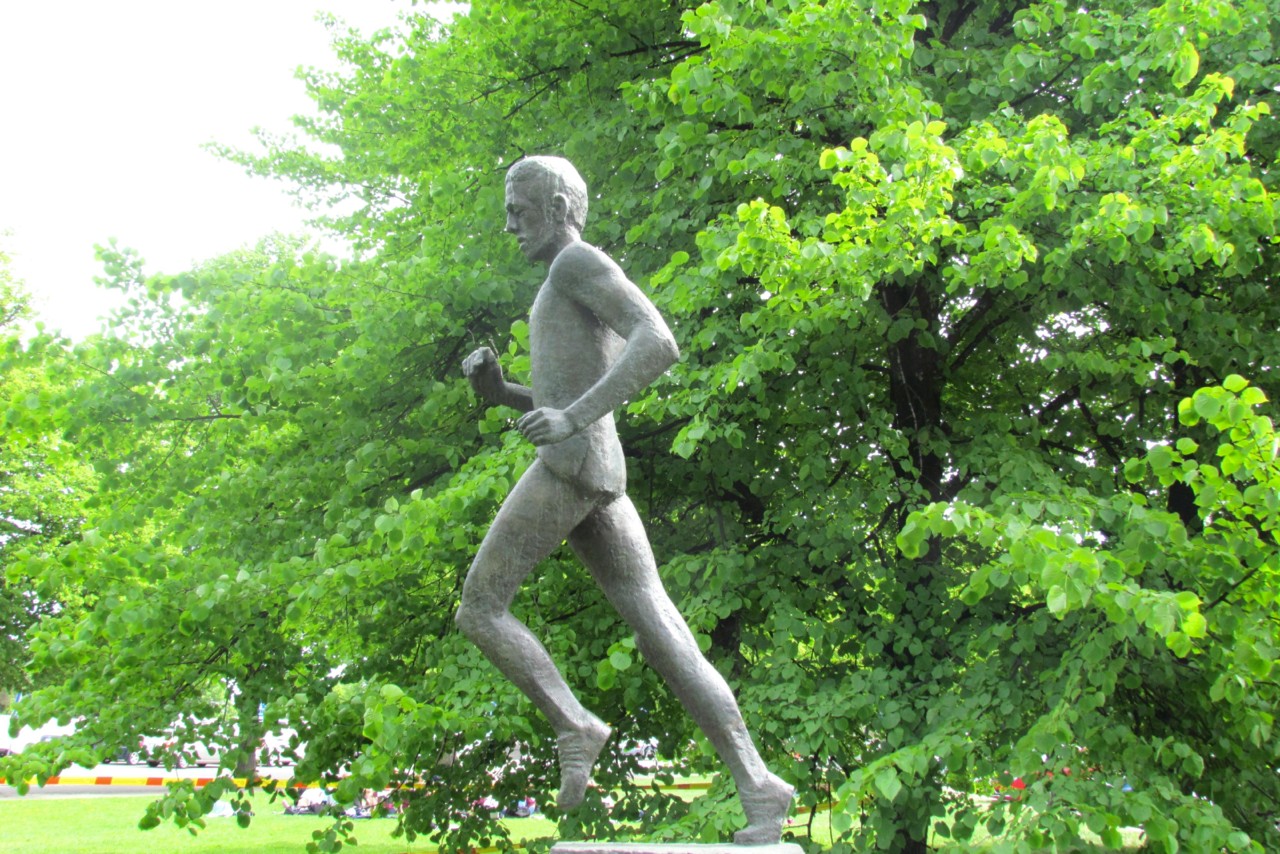 The one in Stockholm is unlike any other we had seen. First of all, because it is over 100 years old, but also for having kept much of its essence from 1912. There are wooden seats, the stadium has a very limited capacity and the way the seats are disposed points to a different way of watching the emotions on the field.

In the middle of the road, also under construction, finding a way to get in was the most complicated. It's not a tourist destination, it has no shops, no guided tours and all the gates we were finding were closed. On one side, we could see the grass and the track but we bumped into the gates that only opened the opposite way.

Inside, several workers moved with relative ease, unaware that we were looking for a way to get inside. We did a pseudo-Olympic lap. We looked for an entrance in the middle, went all the way to the left and then did everything again to the other side. At the distance, we realized that some people were getting in. It was our opportunity.

We felt we should not be there. Everyone we had seen seemed ready to run and we had a "tourist stamp" all over us. We made a pact: let's be relaxed, keep walking, do not look lost, go with ease and make it clear that we know perfectly well what we are doing. Et voilà, a few minutes later we were in the middle of the stands, while twenty to thirty athletes listened to a leader's recommendations before starting a training session.

Journey through the past

The structure impresses by looking as old as it actually is. There are wooden stands everywhere and they are perfectly integrated with the environment, with a shining athletic track and a well-tended grass. We could see where the press stand was and throughout the stadium, there is the repetition of the same coats of arms: some point clearly to the Swedish crown, the other ones left us in doubt. 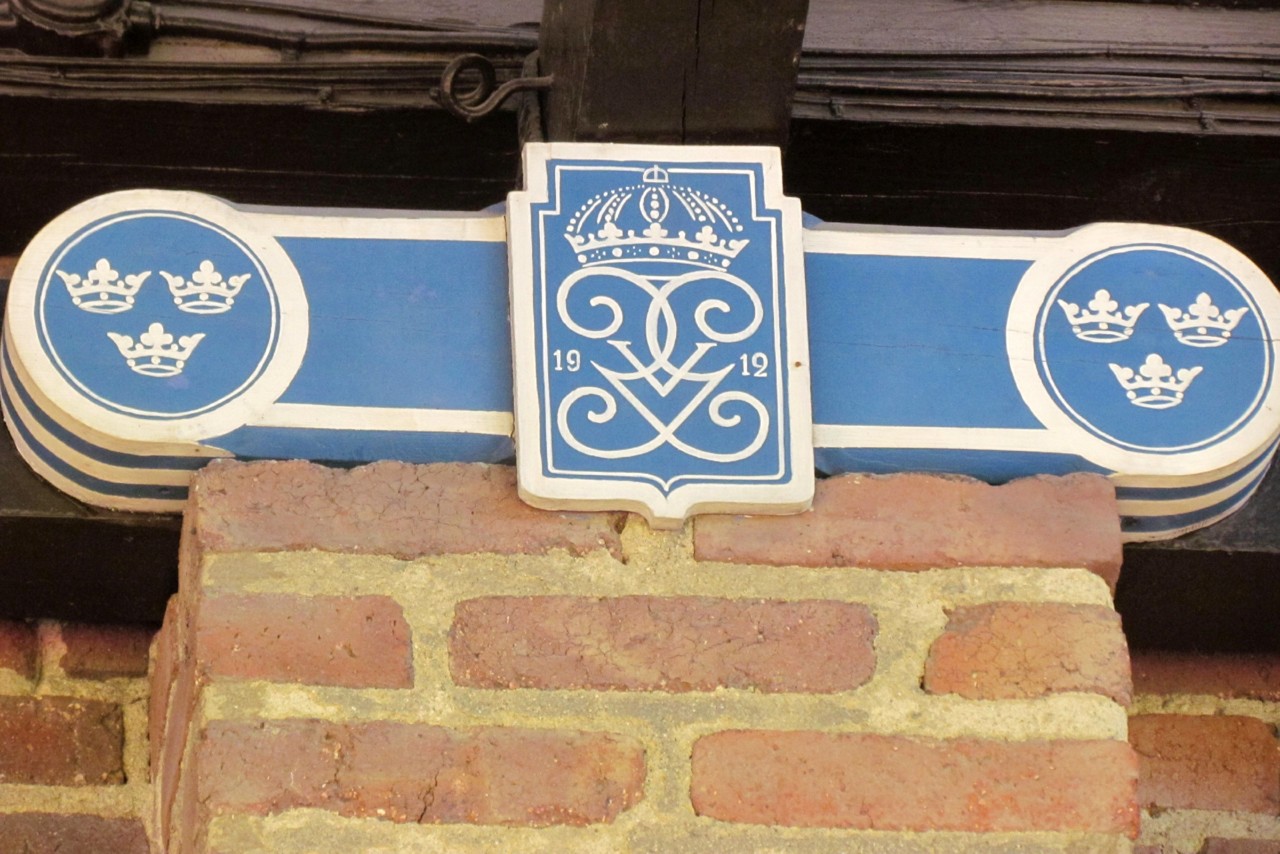 We walked through the stands - away from the group of athletes - and anticipated the exit through the so-called "marathon's door". We stepped on the athletic track and at that moment, looking at the high jump zone, I felt an uncontrollable desire to try it.

In high school, I had spent hours getting personal records, and there, at that moment, the bar seemed to be at a perfect height. But I had not jumped for more than 15 years, I didn't have the right footwear and... I probably should not even be there. Failing would be a risk and a great embarrassment. 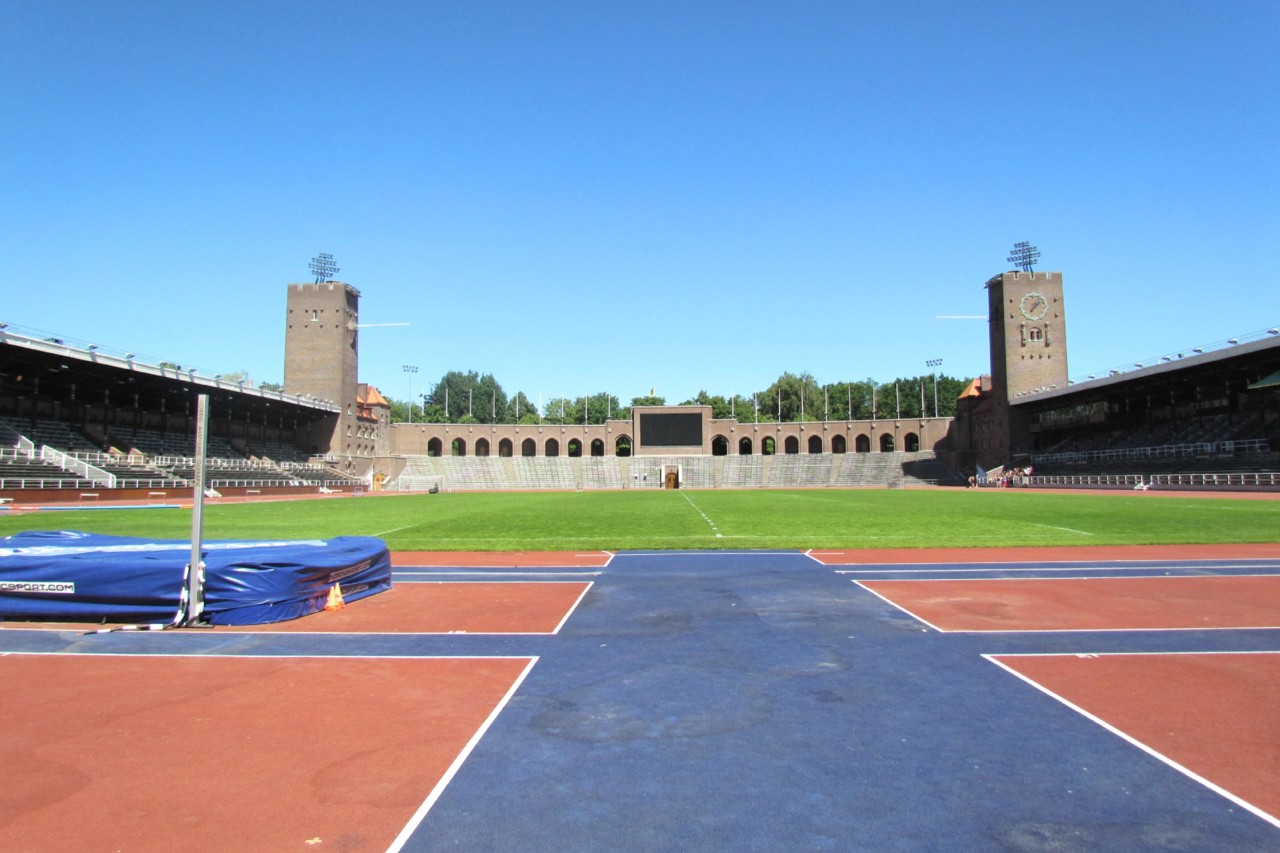 The surprise came on our way out. I'm tired of hearing about the story of Francisco Lázaro, the Portuguese runner who died during the marathon, right there in Stockholm, after having covered his body with grease.

The moment is historic but I never thought there could be an Olympic tribute plaque, with a Swedish version on one side and a Portuguese one on the other. We learned that more than 20,000 participants gathered after his death in a commemorative session at the stadium in a program that "included the practice of sports, songs and music" and where "large fireworks were used, ending with a large "L" of Lázaro in the night skies."

Francisco Lázaro was the first athlete to die during the modern Olympic Games. 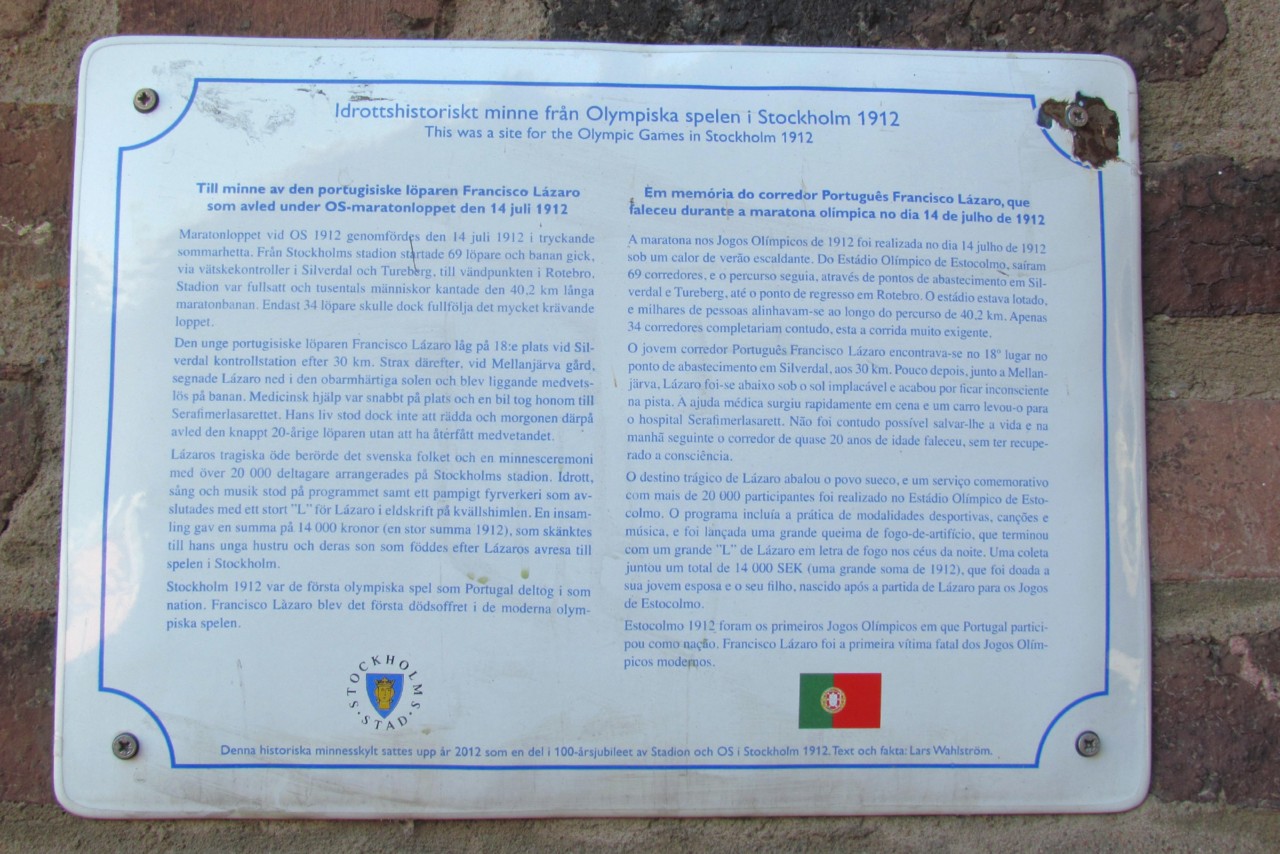